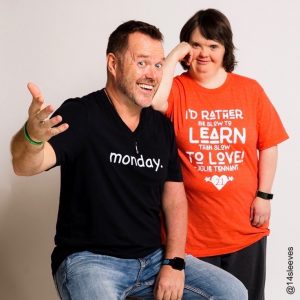 Julie and Derrick Tennant are a dynamic brother and sister duo that loves life and desires to help others do the same. Julie has Down Syndrome and Derrick is paralyzed on his left side. Despite these challenges both of them have learned that in life, obstacles are opportunities and joy is a choice. Julie has an “extra” chromosome and her grampa said it wasn’t extra but everyone else is MISSING it. He called it The LOVE Chromosome.

​We think you’ll agree that Julie is a very wise and insightful person. Julie’s Love Chromosome is something she would like to share. “I wish everybody could have one”, she says. As you get to know Julie, you will see countless ways this love chromosome affects those around her. Allow us to share an example:

Julie and her mom, Barb were at the grocery store together when Julie was 5. A man entered the door wearing a dirty, wrinkled, old trench coat. He was unshaven and disheveled, with hair so greasy that it stuck in clumps. He probably smelled too, but Barb was not going to get close enough to find out. She thought how unnecessary this was as her town had one of the best Rescue Missions in the country. “At least get some clean clothes and TAKE a shower”, she thought.

While checking out Barb took Julie out of the cart. Julie took off like a shot towards the man with both her arms outstretched. He bent down and picked her up as she nestled into his disgustingly dirty neck. Barb panicked and rushed to the man grabbing Julie back and saying (not so nicely) THIS IS MY CHILD!

What happened next has burned itself into Barb’s mind forever. The man looked at her with tears rolling down his filthy cheek. “Lady, he said, I can’t tell you the last time somebody wanted to hold me”.

You see, Barb saw a man and she judged him. Julie saw a need, and she hugged it.

Derrick calls his sister his hero and is proud of nothing more than being “Julie’s brother”. Derrick’s life challenges are more physical. As a gifted athlete he was progressing in his dream for a career in sports when one evening he laid down but did not wake up for three days.

He had undergone what doctors would later termrandom bleeding from point x for an unknown reason. Paralyzed and in a coma, Derrick underwent brain surgery from which he became unable to move his left side. It would take years of therapy to re-learn the basics like walking, talking and simple daily tasks. Derrick is still unable to use his left arm and he walks with a limp, but he has learned a lot through this process. He has also since played basketball competitively in multiple countries despite his limited use of the left side.

Derrick credits one thing for his ability to make it through this process not only alive, but also learning and growing: LOVE. Receiving love from his family, his friends, and his God combined with learning to better demonstrate love in the midst of difficulty were essential to Derrick’s survival and vitality.

It is that love combined with therapy, hard work and practice that have gotten both Julie and Derrick to where they are today. Julie will always have an extra chromosome and Derrick will always be paralyzed, yet both have chosen to do all they can to love life and share joy. They now travel and share their story while encouraging others to use their obstacles as opportunities. Their motto: Live Simply. Love Wastefully. Using their story, inspiration, comedy and even a little magic, Julie and Derrick entertain and motivate audiences around the world.