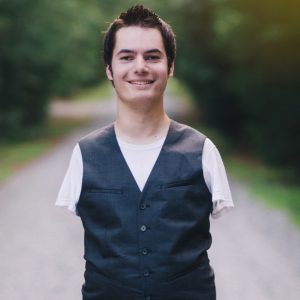 George Dennehy is capturing attention all over the world for his unique talents. Because he was born without arms, he sings and plays music from his heart using his feet. Because George has overcome so many challenges in his own life, he believes that every individual has a purpose and absolutely anything is possible. People are surprised by his life story, including his brush with death in a Romanian orphanage, and his adoption by his U.S. family at the age of one. George started his musical journey by learning to play the cello at the age of eight. He advanced in classical music until he was able to play cello with regional orchestras. With the cello as his launching pad he has taught himself guitar, electric bass and basic piano. Regardless of the setting, those in his audience are always inspired, deeply touched and often realize their own goals are very much within reach.

​George gained worldwide attention after he posted a video of himself covering the Goo Goo Dolls song “Iris” on the web. George’s story went global and he received media coverage from as nearby as his own hometown, and as far away as London and Sydney. Then an astonishing thing happened: The Goo Goo Dolls themselves saw the video and loved it. They invited George to open for them and then join them to perform ‘Iris’ to an enthusiastic and excited crowd of 7,000 fans at Musikfest, an annual week-long concert event held in Bethlehem, PA.

Since then, his career has continued to take off. George recently received a standing ovation for his first TED Talk. CBS News.Com named his video one of the “Best of the Year”. He has been on television and radio all over the world. Major corporations have invited him to their meetings to tell everyone that their own perceived obstacles can be shattered. George has had tens of millions of YouTube views and also has released a CD of original music titled “Have my Heart “.  ​ ​Today George travels the world full time sharing his story and his music. His testimony of a victorious, overcoming life energizes and inspires his audience and is an event that your group will never forget.

“Having met George, our whole family was impressed with his indelible spirit. He has overcome more challenges than most to become a creative, talented, charming young man.”

“George Dennehy has an incredible gift. His message and his music stems from a place few of us have ever experienced. George’s amazing skill on the guitar is only matched by his incredible life story which is told so beautifully through his message and his music. He captivated our large Australian audience, and his story inspired us to rethink our views on foreign adoption. George’s story and music will live on in the hearts of Australians for a very long time.”